“The average New Zealander is paying $2,138 more in tax than in 2017 and ACT would lift that burden with a middle-income tax cut”, ACT Leader David Seymour said in his State of the Nation speech today.

“Labour has gone on a tax rampage to pay for its out-of-control spending, but New Zealanders will be asking themselves whether they’re any better off.

“That’s even before future governments consider new and higher taxes to repay the billions in COVID-19 borrowing.

“The problem is not just that departments are sucking up more and more taxpayer dollars to achieve very little. Bureaucrats actually do even more damage trying to keep themselves busy.

“Labour’s lock down, borrow, print and spend approach to Covid-19 has given us the Year of the Hangover. Kiwi battlers are being squeezed from all directions and they need a break.

“The current rate of inflation amounts to a 6 per cent tax on everything. Doing the groceries, filling up the car and paying the rent is more expensive, but wages aren't keeping up. On top of that, Labour’s hitting Kiwis with new taxes.

“ACT set out a range of solutions to the cost of living crisis in December. In particular, we would deliver a middle income tax cut while reducing wasteful spending to balance the budget sooner.

“Cutting the middle-income tax rate from 30 per cent to 17.5 per cent will allow the average full-time worker to keep $2,000 more a year to help deal with the rising cost of living. That’s almost $40 more a week in the pockets of hardworking taxpayers to help them with the cost of life.

Below are calculations showing the growing tax burden under Labour. 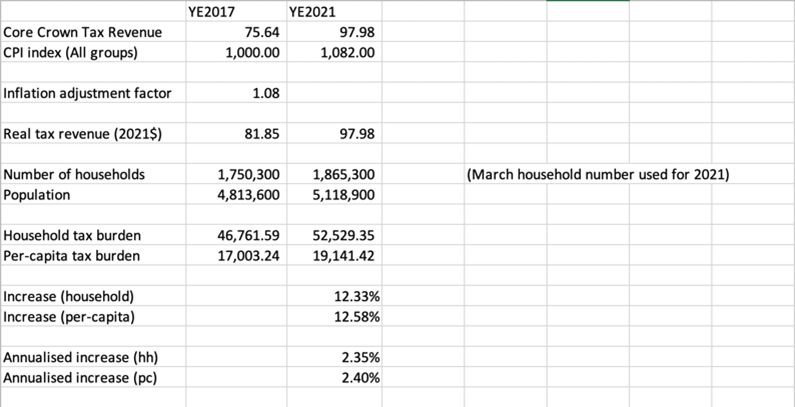