“Jacinda Ardern chose to meet with a team of her spin doctors instead of meeting with the organisers of the Groundswell protest,” says ACT’s Primary Industries spokesperson Mark Cameron.

“Thousands of people from rural New Zealand protested against the Government in July after a raft of regulations have been piled on them.

“The organisers of the protest wrote to Jacinda Ardern asking if she would time to meet with them after 10am on the 12th of August.

“Her office responded saying she had “a prior diary commitment.”

“It turns out there was nothing in her diary for large chunks of time that day and one the commitments was a meeting with her spin doctors.

“The organisers of the Groundswell Protest have raised legitimate concerns about the issues facing rural New Zealand.

“Rural New Zealand has become a punching bag for the Government. They’ve taken blow after blow as a raft of new regulations shows just what this Government really thinks about the primary sector.

“Whether it’s freshwater and winter grazing, a ban on live exports, Significant Natural Areas, indigenous biodiversity or a tax on utes, Three Waters, rural New Zealand has taken a hammering.

“All 10 ACT MPs attended protests around New Zealand, and we will show our support for future protests.

“The organisers of Groundswell deserve an explanation from Jacinda Ardern about why she wouldn’t meet with them. They have requested another meeting next week and I implore the Prime Minister to finally start listening."

A copy of the Prime Minister's diary on the day the meeting was requested can be found below. 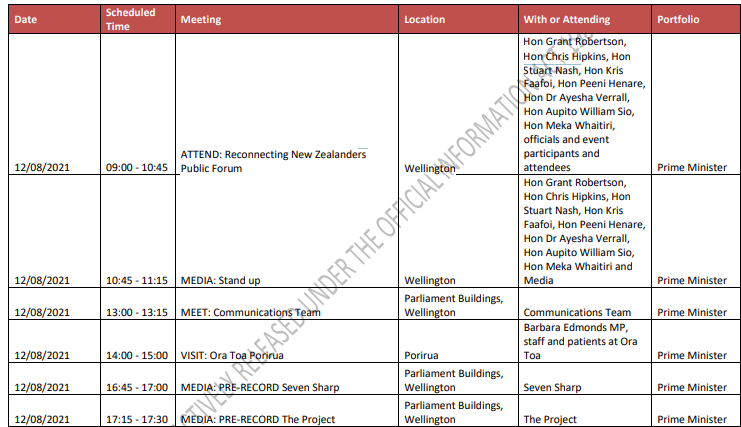